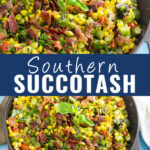 This Southern Succotash is a bright and fresh combination of corn and lima beans with sweet cherry tomatoes, okra, and jalapenos for a little spicy kick. Add some salty, savory bacon and some fresh herbs, and you have a crowd-pleasing favorite.

This Southern Succotash recipe has it all, with fresh, sweet corn, traditional lima beans, and bright cherry tomatoes. Plus some extras including jalapenos for a little spice, bacon for a little extra salty and savory, lime juice, and fresh basil.

Many succotash recipes call for cream for richness, but will turn the vegetables dull or gray as a result.. In this recipe cream is replaced with butter, which adds the same richness while keeping the vegetables bright and colorful.

It is a beautiful summer side dish that can (and should!) be made all year round (with the help of some frozen veggies, of course!).

Succotash is an American dish that was originally introduced to us by the indigenous people of northeast America in the 17th century. It has since been anglicized, into different popular versions known today.

The two main ingredients found in succotash are corn and lima beans. Other vegetables such as bell pepper and tomtaoes, as well as meats such as corned beef or salted pork are often added depending on region.

In the southern succotash recipe I'm sharing today, there are the traditional corn and lima beans as well as jalapeno, cherry tomatoes, and okra. You can also add in your own fresh or frozen vegetables to this recipe that you'd like to use up such as bell peppers or zucchini.

In all honesty, this recipe is better with fresh okra. However, here in the Midwest, I have a very difficult time finding fresh okra for most of the year. If you can find fresh okra, absolutely use it! I'll include directions in the recipe notes as well, but you'll want to use 1-2 young okra, sliced. Then add it with the onion and garlic, which will allow for a longer cook time. When the succotash is done, the okra should be soft, but not mushy.

Otherwise, you can use frozen okra (which, fair warning, can often have a slimy texture), or omit it. For frozen okra, add with the corn and lima beans for a shorter cook time.

What to Serve with Southern Succotash

Serve this southern succotash as a side dish to your favorite protein such as grilled or baked chicken or pork. Some of our favorites are this oven fried chicken or some smoked sausage or kielbasa.

You can also serve this succotash as the focal point of your meal over buttered southern cornbread. 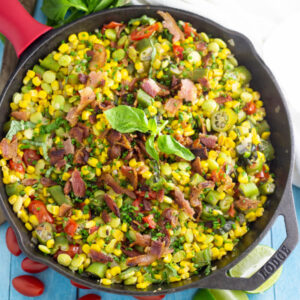