Creamy Watergate salad is a quick and easy dessert made with whipped cream, pistachio pudding, pineapple, and marshmallows. A crazy combination that's a real hit at parties and gatherings.

Watergate salad is a sweet and creamy, and unexpectedly tangy dessert, despite the fact that it's called a "salad."

Watergate salad, a.k.a. fluff salad or pineapple pistachio delight, is SO easy to make, and cheap too. You'll want to bring it to every gathering. My kids beg for it every time they see marshmallows at the store!

This version of Watergate salad uses fresh homemade whipped cream instead of whipped topping, making it even more creamy and delicious. Pistachio pudding gives it its distinct mint green color, pineapple gives it a tangy citrus kick, while marshmallows add an extra hint of sweetness. Plus, a handful of pecans give it a little crunch.

It sounds like such an odd combo, but it actually comes together and is really delicious.

Why Is It Called Watergate Salad?

How Watergate salad got its name is still somewhat of a mystery.

Some say that it was originally supposed to be Pineapple Pistachio Delight, but before it was printed, an editor changed the name to go with current events.

Others think it's named after a Watergate cake that has pistachio pudding in the cake itself and the frosting. The cake is said to have gotten the name from all nuts in it, and in the political scandal itself.

The most likely explanation is probably a combination of these two theories, and has actually nothing to do with the scandal itself.

Watergate salad has just a few simple ingredients that you can find at any grocery store.

I was shocked the first time I saw the ingredient list. It seemed a very strange combination to put together to make something that actually tastes good. But trust me. They actually do work together and taste good too! 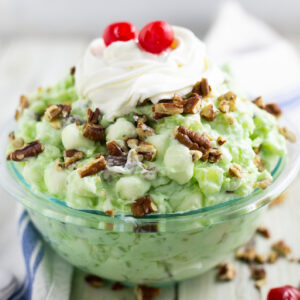