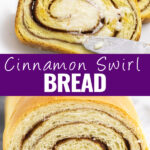 Homemade Cinnamon Swirl Bread is a yeast-raised bread featuring soft white bread with beautiful swirls of sweet cinnamon-sugar. Slice into soft warm bread with your morning coffee or whip up some epic French toast with it.

This Homemade Cinnamon Swirl Bread is a soft, white bread with cinnamon-spiced swirls. Slicing into it and slathering butter on is a little bit like heaven.

Cinnamon swirl bread is a little bit like cinnamon rolls, but not quite as rich. It has that spicy cinnamon smell mingling, of course, with the smell of freshly baked bread, with just the right amount of sweetness that we don't have to call it cake.

What makes this cinnamon swirl bread the BEST? Well, I hate when it falls apart or gaps, and this one won't! It stays together and the swirls stick to the bread, so no gaps.

Now if you're one of those people (like me!) who likes to unravel the bread and eat it in a spiral strip, this bread is still for you. You can totally do it yourself still, but the bread won't do it unless you want it to!

Active Dry Yeast is a dry yeast that needs to be activated prior to use (with methods such as warm milk or water with sugar).

Instant Yeast is any dry yeast that is ready to use the instant you open the package. No activation required. To use instant yeast instead of active, simply add the yeast directly to the dough mixture (like after step 2 of this recipe) instead of dissolving in warm liquid.

Why Do the Ingredients Need to be Warm?

Yeast activates at about 100°F-115°F, so to activate the yeast and have the best, fluffiest, softest bread, it's important to bring the water and milk to that temperature.

This is probably easiest in a saucepan with a candy thermometer attached to the pot. It doesn't take long, so watch closely.

Why Does Cinnamon Swirl Bread Separate?

But don't worry! This recipe covers those problems!

How to Keep Cinnamon Swirl Bread from Gapping

In this recipe, we egg wash the bread dough before adding the cinnamon-sugar mixture. The egg acts as a binder that keeps the bread from gapping, separating, or falling apart!

AND we also add a little bit of flour to the cinnamon sugar mixture that the egg can bind to. With these two ingredients binding for dear life, you'll have perfectly swirled cinnamon swirl bread without gaps or separating.

Can I Add Raisins to My Cinnamon Swirl Bread?

Yes. Sprinkle about ⅓ cup on each loaf after adding the cinnamon-sugar mixture.

How to Serve Cinnamon Swirl Bread

Try slathering it in butter, honey (or this honey cinnamon butter), or cream cheese (or a flavored cream cheese like cinnamon, pecan, or blueberry). 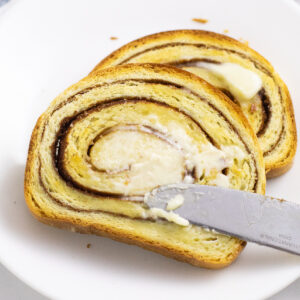 Recipe makes 2 loaves. Each loaf is about 16 pieces (32 pieces all together).