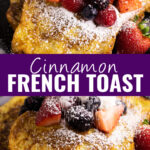 This simple and easy Cinnamon French Toast uses basic ingredients like bread, milk, eggs, and cinnamon and is cooked in a little bit of butter for the perfect quick, sweet breakfast in just 20 minutes.

Cinnamon French toast is a classic breakfast. It's quick. It's easy. It's freezer-friendly. And it's delicious.

This cinnamon French toast uses simple ingredients like eggs, milk, vanilla, and cinnamon and is then cooked in just a little bit of butter to give the edges some of the extra richness from the buttery flavor.

This recipe comes together in just 20 minutes and is perfect for breakfast, brunch, or brinner.

What's the Best Type of Bread for French Toast?

To make excellent cinnamon French toast, you need bread that is sturdy enough to be soaked in the egg mixture but soft enough the egg can soak into the center and not just coat the outside.

Why is My French Toast Soggy?

There are several reasons your French toast might be soggy. Here are a few and how to fix it:

Should the Center be Soft?

Yes. The center of your cinnamon French toast will be soft but hot. It should not be runny.

Sometimes the best part of French toast is the toppings. Whether you're a classic butter-and-maple-syrup person or you like to try new things, here are some ideas for dressing up your breakfast.

How to Make Cinnamon French Toast for a Crowd

Making French toast for a crowd is really simple. You can either serve as you cook, or place each cooked slice on a lined baking sheet in a 200°F oven to keep them all warm until you're ready to serve.

How to Freeze Cinnamon French Toast

Cook French toast according to recipe instructions. Allow to cool to room temperature. Then lay out flat on a baking sheet lined with parchment paper or a silicone mat. You can put them in layers. Just make sure to put a sheet of parchment paper or mat between the layers. Freeze flat. Then transfer to a freezer bag or container.

Cook from frozen in a skillet with a little butter or in the toaster until warmed through. 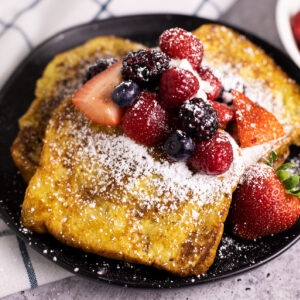 Nutrition facts do not include additional toppings.

UPDATE INFO: This recipe was originally published in February 2017. It was updated with new pictures, tips, and video and republished in October 2022.