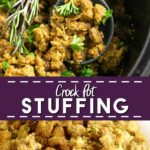 Free up your oven with this simple and classic Crockpot Stuffing! A traditional recipe with onions, celery, and herbs, cooked to perfection in the slow cooker!

My grandma makes the best stuffing.  Seriously, like, ever.  I normally don't care for stuffing, but hers... I could eat it for days (and frequently do after holidays!)

But my grandma's stuffing recipe wasn't written down! So I've watched her do it about a dozen times, and finally I've been able to replicate it. I shared her original traditional stuffing recipe here. This Crockpot Stuffing is her famous, amazing, loved recipe turned slow cooker!

Crockpot stuffing is amazing for the holidays because it tastes just like your favorite traditional stuffing, but it also frees up your oven for the turkey!

This Crockpot Stuffing recipe includes classic ingredients such as celery and onion for fresh pops of crunchy flavor, butter, and herbs, coming together to make the best stuffing you've ever tasted.

What's the Difference Between Stuffing and Dressing?

Is there even a real difference between stuffing and dressing at all?!

One difference between stuffing and dressing is geographical region. If you're from south of the Mason-Dixie line, you probably call it dressing. Whereas, it's typically referred to as stuffing in the more northern states.

There is also one major technical difference.

So long story short, there is technically a difference in cooking methods for stuffing and dressing. But generally, you can use the words interchangeably, and we'll all still know what you're talking about.

How to Dry Bread for Stuffing

In my experience the best method of making dried bread cubes is tearing the bread into bite-sized bits, laying it out on a baking sheet or large casserole dish, and letting it sit there for 2-3 days, tossing it or stirring it every once in a while to make sure all the pieces get air time.

You can also use store-bought bread cubes.

If you're like me and you often forget to do either of those things, and now you have to make the stuffing, like TODAY, you can also use the oven method.

To quickly dry out your bread, tear it in bite-sized pieces, and lay it out on a baking sheet (you may need to do this in batches!). Then toast it in a 275°F oven for about 40-50 minutes, stirring halfway through, until bread is hard and dry (but not burnt).

To Convert Any Stuffing Recipe into Crockpot Stuffing

You can actually convert any recipe into a slow cooker version. You just need to make a few simple tweaks. So if you have a favorite stuffing recipe that you don't want to let go of, but you still want to free up your oven, try this: 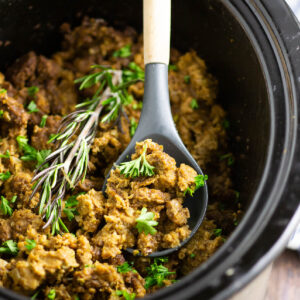 UPDATE INFO: This recipe was originally published in October 2015. It has been updated with new pictures, video, and detailed instructions in October 2019.