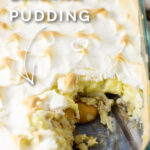 Most southerners will tell you that it's not really banana pudding if it isn't topped with meringue and served warm. Warm, creamy pudding and fluffy meringue is pretty much as comfort food as you can get.

This Southern Banana Pudding recipe features a homemade creamy custard (that is worth the little bit of extra time it takes to make it), fresh bananas, and topped with fluffy, slightly toasted meringue.

But even with everything being homemade from scratch, you'll still be able to dig in in just over a half hour!

Quick, comforting, and delicious makes this the ultimate dessert.

How Do You Keep Banana Pudding from Turning Brown?

It should be noted that while it may not look too pretty, if the bananas in your pudding turn brown, it's still okay to eat. Bananas turn brown after they're sliced as a reaction to the exposure to oxygen.

So the easiest and best way to prevent it is to slice your bananas just before adding and smother them completely with the custard so that no air will get through. This will act as a barrier between the bananas and the air, slowing down the reaction to exposure to air. Then serve it ASAP so they don't have as long to brown.

If you need to wait a little while before serving, you can toss your sliced bananas in 1 tablespoon of lemon juice to slow down the browning. This will change the flavor, but not enough to be noticeable.

However, you shouldn't expect any of these methods to last longer than a day or so. Beyond that, it will still be edible (up to 3 days), but the bananas will likely be darker.

Banana Puddings with whipped cream on top have gotten more and more popular, but it's hard to beat the southern classic topped with fluffy meringue.

You may have noticed that homemade custard uses egg yolks only. As a way to reduce waste, this southern style banana pudding uses the remaining egg whites to create a fluffy meringue to go on top. Pretty brilliant, if you ask me.

Meringue-topped banana puddings are also generally eaten warm, as opposed to their chilled whipped cream counter-parts. Whichever way you eat it, it will be delicious. In fact, definitely try them both! 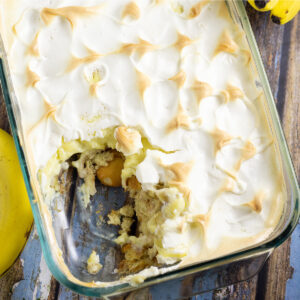