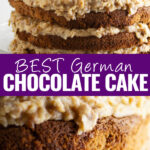 The most amazing traditional German Chocolate Cake that's moist, rich, and layered with gooey, sweet coconut pecan frosting. This homemade classic version is the best you'll ever have!

This German Chocolate Cake recipe is a southern classic, handed down in my husband's family. Following tradition, it is made with sweet baking chocolate instead of cocoa powder is filled and topped with gooey-sweet coconut pecan frosting, which, in my opinion, is the best part.

We love this cake so much that we make it for my husband's birthday every year, and I know your family will love it as much as mine!

Why is it Called a German Chocolate Cake?

Believe it or not, this cake is actually not German! It was originally called German's Chocolate Cake after Sam German.

Sam German was an English-American baker who worked for Baker's chocolate and invented a new kind of sweet baking chocolate in 1852.

About 100 years later, a recipe was published in a Dallas newspaper from a homemaker sharing her chocolate cake recipe using this particular variety of sweet chocolate. Baker's chocolate began distributing the recipe throughout the country, during which time many publishers dropped the "'s" to call it what it's known as now "German Chocolate Cake."

So it's actually American, not German!

What is Different about German Chocolate Cake?

What is German Chocolate Cake Frosting Made of?

German Chocolate Cake is smothered in a special gooey, sweet, and decadent coconut pecan frosting (read more about it here).

It's made like a custard with sugar, milk (or in this case evaporated milk), egg yolks, butter, and vanilla. Then when it thickens, the coconut and chopped pecans are added to make the classic frosting that German Chocolate Cake is known for.

To Buttercream or Not?

Traditionally German Chocolate Cake is prepared with just the coconut pecan frosting. However, I have seen many recipes recently that include chocolate buttercream, and they do look really pretty.

In a large bowl, beat butter, cocoa powder, and powdered sugar until fluffy using an electric hand mixer. Add in cream and vanilla extract. Beat until combined and fluffy (if you feel any grittiness, that means you're not done beating yet!). Transfer to piping bag(s) for frosting. 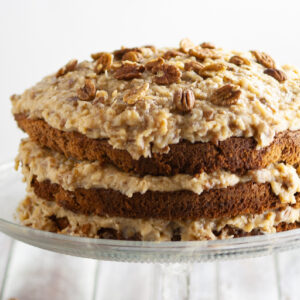 UPDATE INFO: This recipe was originally published in October 2014. It was updated with new pictures, tips, and video and republished in September 2022.